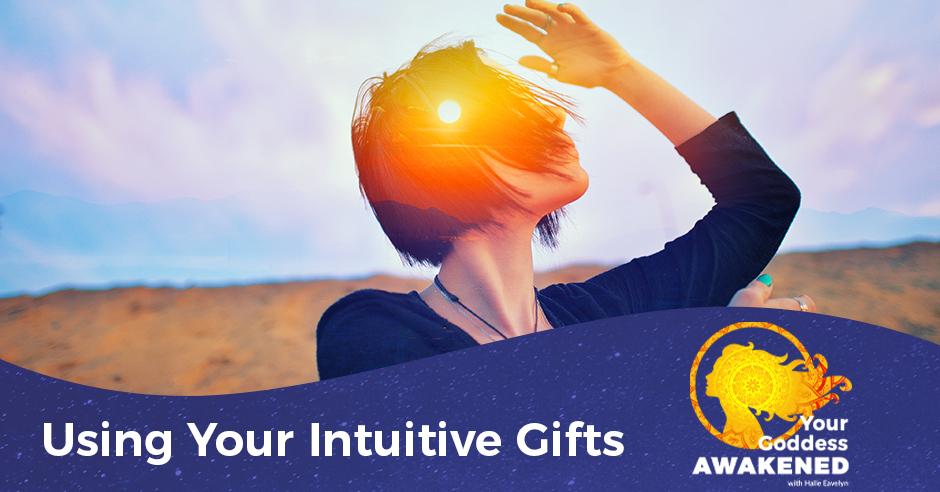 Whether you accept them or not, we all have intuitive abilities. At one point or another, you have probably heard a voice in your head or felt a feeling in your gut and changed what you were doing on the outside because of that.

In today’s show, I am talking about intuitive gifts and how we can use them extensively to benefit our lives. I also touch on the forms of clairvoyants and how they could make a big difference in our lives if we let them in and make them feel welcome.

We are going to be talking about goddess tips and how they can affect you in your life, help you grow and have a better experience. I wanted to talk about intuition first. I have been blessed to have several wonderful intuitive guides. I have a client who I love and adore and who also has been working with me as her client for several years. Her name is Shoshanna French Stokes. I’m going to have Sho on a future episode of the show because I love and adore her. She is so gifted intuitively and more importantly, gifted in explaining it to other people. When I first started working with Shoshanna, I had gotten to that place where I accepted and believed in my own intuition, as opposed to poo-pooing it. I had spent a long time with all of these capabilities without buying into my own feelings as being true.

I don’t know how else to explain that. It’s like, “This happened, but it doesn’t mean anything. This happened, but it’s not important. This happened, but I don’t think it has anything to do with my own abilities as a healer or as an intuitive.” I spent all of that time, probably from my spiritual awakening or maybe even before until I was around 50, saying, “I don’t believe that my abilities are my own.” I hope to shortcut that process for you if you’re in that place that I was in and say, “Whether you accept them or not, we all have got intuitive abilities.” Even if you don’t think you have an intuitive bone in your body, you probably have heard a voice in your head or felt a feeling in your gut and changed what you were doing on the outside because of that.

If that’s happened to you, congratulations, you have used your intuition. Maybe you didn’t use it extensively. Maybe you haven’t taken it into your own practice on a daily basis or begun to use it in your work. However, it’s still there. We talked about the idea of these intuitive gifts. I’ve come to believe that gifts are everyones. We all have them. The question is, “How much are those gifts developed in you?” Some of us get lucky. We show up with them fully developed. In those people’s cases, because there’s no manual for it, they probably would say they showed up unlucky because they feel like they’re these antennas and nobody has taught them how to use the antenna. The tip of the antenna is bright, red and sore from being overutilized. It’s a scary thing.

If you have the gifts and you haven’t gotten to a place where you can feel comfortable yet with them, then that’s okay too. There are three kinds of people in the world that I’ve seen. There are the people who are asleep who don’t know that they have it, people who are awake and using it and people who are so awake that it’s painful. Either way, whatever your situation is, know that it’s something that you can develop so that it can support you instead of causing you pain or it’s something you can develop and it will support you because you never had any experience with it before.

There are multiple kinds of intuition and technically, they are forms of clairs. Clairvoyance is the one that most people know. Clairvoyance is like an inner seeing. It’s not an inner knowing and inner knowing is clairsentience. There’s inner hearing, which is called clairaudience. There are clairs for every one of your five senses. There are people who can use their psychic sense of smell to their benefit. However, I’m not one of them. For me, clairvoyance, that‘s seeing. Clairaudience, hearing is mostly where I experience it and then sometimes clairsentience, that knowing. Usually, for me, I’ll know something a few seconds or a few minutes in advance that it will unfold. It’s almost like I got a glimpse into the future and the thing will unfold in front of me.

What I want to invite you to do is whatever those feelings and gifts that you have, allow your feelings about them and the gifts themselves. If you feel like you have clairaudience, you hear stuff, but you don’t like that gift and it feels uncomfortable, what has it cost you in the past? That’s probably what has made you uncomfortable. What could you do in the future differently to make friends with it? Each of our clairs, whether you believe you have them or not, is showing up somehow in your life and making a big difference. It could make a bigger difference if you would allow it in and make it feel welcome.

That’s true of all of our feelings. It’s making your feelings welcomed, even the ones of pain, anger, suffering or fear. It will shift almost immediately in a way that you cannot shift otherwise because we’re constantly in resistance about the feelings that we don’t want. When we have a feeling and we say, “Stop, no, shut up or go away,” that feeling is constantly trying to get back in. We’re not letting it because we don’t like it, but if we would let it in, it would make things so much easier because the feeling would be allowed to pass on, which it has not been allowed to do. It’s constantly trying to get your attention. That’s something that hopefully you could incorporate maybe about your own gifts and psychic abilities.

I also came into this awareness and it was such a powerful spirit. Remember that’s my favorite word for God. You can call it anything that you would like. Spirit is much subtler than I had realized. I’ve gotten three messages that were little thoughts that fast like, “Maybe I could do this. What if this were possible for me?” Most of the time, I don’t act on those thoughts. I’m busy. I’m doing things. I’m living my life. I don’t have time for that thing. That tends to be how we all show up about this. However, in these three instances, I took action immediately. I said, “I’ll stop in the middle of this thing that I’m doing. I’ll go over here and do this thing for five minutes and then I’ll come back over here.”

In every case, a good result happened. It was a stepping stone towards something else. One of my favorite expressions, you’ll probably hear me say this over and over in these episodes is, “What is my next smallest step?“ I love my bumper sticker coaching. That’s going to be one of my first bumper stickers. I call it bumper sticker coaching because you can use it in a pinch. It is short enough that it fits on a bumper sticker. You can use it in a pinch because it’s so short, you’ll remember it. When you ask, “What is my next smallest step,” you don’t know what the results of the thing are going to be. You can desire that result, but you can’t be certain of the outcome and you don’t know the path to getting there. However, when you welcome in the next smallest step, when you ask what that is, it will lead to the next one and the next one, which will lead to that goal that you set, to that desire that you had. That is so powerful. That can shift everything.

I want to invite you to start incorporating that bumper sticker into your daily ideas, thoughts and to ask, “What is my next smallest step?” When you’re sitting there and you aren’t certain what to do, ask like, “Do I eat a cheeseburger? Do I go to Paris?” For example, if you wanted to go to Paris, what could you do that would bring you that little way closer. “Could you research pricing for next year? Could you get your passport renewed? Could you make a French meal? Could you start taking French lessons? Could you go and listen to a French speaker or listen to some French music?” Those are the ideas off the top of my head. Each one of them is our next smallest step that could bring you closer to your desire to go to Paris. You could watch a movie set in France.

The idea though is that by asking that one question, everything can flood in. Whereas if you said, “I want to go to Paris,” you would immediately have a big story in your head about why that isn’t possible. It would distance you from the opportunity to bring it closer. The spirit is very subtle. “God works in mysterious ways“ is the old expression and I love that. Mysterious and subtle ways are the new ways that I have of thinking about this. I hope that you have enjoyed this episode. I hope that you will share it with all of your friends and that you will subscribe and come back every week for more goddess wisdom, trauma clearings and wonderful guests. Blessings.