Surprising Lessons From a Category 5 Hurricane 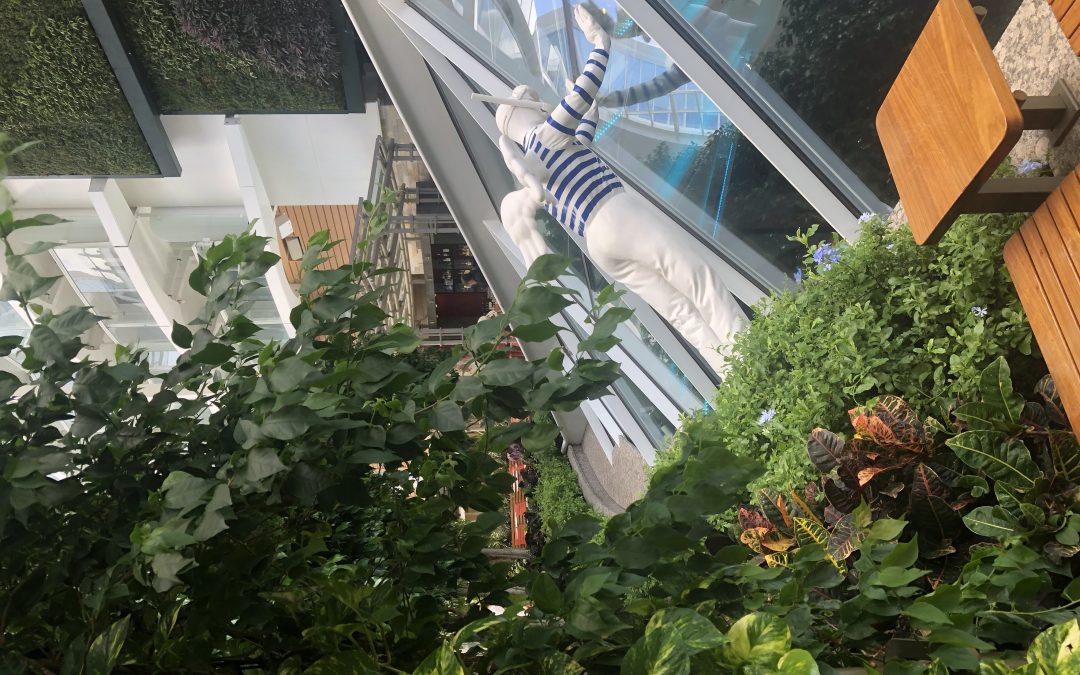 When Hurricane Dorian, one of the strongest storms ever recorded, began to turn from a tropical gale into a force that would flatten two islands and decades of man’s attempts at progress there, I was on board the largest cruise ship in the world.

Symphony of the Seas is basically a small city on the water; imagine if Disneyland suddenly began to float. Sixteen decks, six thousand guests, thirty-five hundred crew — I’ve been to stadiums that held fewer people.  It takes days of walking around before you can finally find your way about, meanwhile losing yourself in places like the boardwalk (complete with carousel) Central Park (a strolling outdoor ode to trees taking up all of deck 8) and, oh, did I mention the ice rink?

It was day two, at sea, when we got the first message over the loudspeaker from the captain: we would not be visiting the Virgin Island of St. Maarten, and instead would be moving our San Juan and Labadee, Haiti days up by one each, so as to stay ahead of the growing cyclone.  Over the next week, there were four more announcements, each keeping us ahead of the storm as we chased the sun and ever more entertainment.  It was fascinating, interesting and terrifying, all at the same time.

Bartender: What can I get you?

Me: I don’t really feel like having a drink.  I’m worried about the hurricane.

Bartender: One Hurricane, coming right up! Or do you prefer a Bahama Mama?

For me, it wasn’t just my first huge cruise ship, it was my first hurricane, as I’ve been traveling for each of the last two since my move to Miami.  Here’s what I learned:

You may need new systems

When something changes, like the weather, it can be obvious your old system just won’t work.  Home in Miami, waiting on the worst of the storm, we took advantage of a sun break to walk the dog.  On the way back, we got caught in a huge downpour – I ended up yanking off my shoes and sprinting barefoot in the rain the last half-block home.  After that, I realized that in a hurricane, even the simple act of walking the dog required a new approach. We timed it between the heaviest rains, and towels, rain gear, and umbrellas were at hand to avoid turning our foyer into a giant puddle.

We tend to do stuff by rote. Whether it’s a cruise ship visiting the same ports according to a set schedule, or how you approach your business, sometimes we’re doing things the way we learned or are used to.  Is that the most efficient or best way?  With a stranger’s eyes, take a look at what you are doing and how you are doing it – maybe this is an opportunity to do something in fewer steps, or to make an alteration that wasn’t obvious when you were new in your business.

Timing is always a factor – yes, everything is happening, just not necessarily to you… right now.  Hurricane Dorian was bizarre, traveling at such a slow pace it put the Bahamas in a blender, turned it to low, and stayed there churning for over 48 hours.  Meanwhile, the weather channels, which suddenly became a substitute for headline news, talked about what would be happening in the constantly delayed future.  Every time we turned on the TV, someone was describing what would be happening tomorrow, or the day after, depending on how quickly the storm moved, as if it were occurring presently.

Weatherman On Florida Beach: There COULD be a storm surge as high as thirty feet here. [GESTURES to the gentle, lapping waves behind him] There MIGHT be winds as strong as two hundred miles an hour by then. [Soft breeze blows]

We all walked around acting like it was happening back home now.  On the ship, many didn’t have internet, so the rumors would start with those who did, or were glued to their TV, and trickle down to the ones still attempting to have a news-free vacation.

I spent hours on the phone with American Airlines, rescheduling a flight over and over as the weather patterns shifted, so that one of our party could get back to work without getting stranded.  Ironically, she ended up on a flight the same day she was originally scheduled for, and all of that could have been skipped in favor of catching some rays.

Our last reschedule was to Nassau, and we spent a few lovely hours enjoying the waterfront before the hurricane hit the Bahamas.  I kept capturing pictures of the historic town squares, the straw market, the local people, afraid they might be my last, as I listened to a foreboding radio broadcast from the governor on Grand Bahama Island.  The Bahamian people are all well-seasoned to hurricanes.  The attitude around Nassau was, “If it falls, we rebuild, and in the meantime, we enjoy our lives. Would you like a Sky Juice or a Pina Colada?” (Yes, major drinking is encouraged during cruises).

The day after Dorian left Abaco Island in matchsticks, every Bahamian with a boat became a first responder, out rescuing people and animals alike.  One woman brought nearly a hundred dogs to her home.  And this time, we in Miami barely got a stiff breeze.

It’s often like that in our lives.  Mark Twain said, “I am an old man and I have had many troubles.  Most of which never came to pass.” So look at the timing and ask, “Is this happening to me, right now?” Because you might be ignoring the experience that you are actually having, worrying about something in the future that might not happen.

Life Is the Actual Cone of Uncertainty

The news media mostly drove our fear of the storm.  Yes, in some areas, it was horrendous.  In others, it was completely calm, or there was about an inch of water in the streets.  Yet we Freaked The EFF Out across state after state.  I’m not talking about not taking necessary precautions – I’m talking about our habit of creating fear as a narrative for our lives.

When I went into this hurricane prep week, I knew very little about the storms.  I had followed Hurricane Matthew from over 3000 miles away, worrying about my family, just working too hard leading a tour to stay involved moment to moment.  So this was my first time getting to experience it locally, and my first time paying attention to the Cone of Uncertainty.

Originally, I thought the Cone was the general path the hurricane would take, with the edges being the least windy and the eye of the storm coming up through the center.  Around my fifth news broadcast, I realized the meteorologists and weather peeps had almost as little idea of where the storm might actually be heading as I did (Alabama, anyone?)  WTF??

Dorian was making it even harder than usual because it had all these little swirling hurricanes in the middle of the growing storm, so the wind could literally take it in any direction.  All you could do was gather supplies, evacuate if need be, and pray for an outcome that didn’t involve your neighborhood being flattened.

That’s really how our lives are – the actual Cone of Uncertainty is understanding that we get to plan for everything and then get out of the way so that the path can unfold, even if it’s not the one we thought, even as it changes moment to moment.  Relax and enjoy the ride.

We Can Stay Present Everywhere

I was in the lounge, listening to the incredible singer from St. Vincent, who was on a roll.  He started with Rainy Days and Mondays, moved through Stormy Weather, and was now in the middle of Raindrops Keep Falling On My Head.  It was nearly midnight, on the final night of the cruise.  Instead of enjoying those songs, enjoying time with my girlfriend, or reliving the memories of the week at sea, I was ordering canned goods on Amazon and figuring what to do about getting gas in the car.  It was so incongruous I actually noticed.

I put my phone down (Amazon was not going to run out of Vienna Sausages in the next hour) and took my sweetie’s hand.  I dove head first into the sounds coming from the piano and the golden throat of the Caribbean singer.  And we talked.  About the cruise, about our next vacation – we even took time to chat with a charming Italian couple we had met a few nights earlier.  Enjoying the moment we were in, instead of worrying about one that had not yet come, made all the difference that night.  It also made it memorable.

I will never forget my Aunt Shirley, standing at the podium twenty years ago to thank all of us gathered for her fiftieth wedding anniversary, asking, “Where did the time go?” I swore in that moment not to let that happen to me.

What can you do to ensure it doesn’t happen to you? Set the intention to become aware when you’re not being present, which, ironically, brings you back to the present moment.  Pause wherever you are to notice what might seem mundane – a flower, a painting, a lovely curve in architecture or a serene walkway.  Pet a dog, hug a kid, ask what would make you happy right this second and then go do that.

Even if it takes a hurricane (or this story) to remind you to enjoy the present moment, one day, it will be so awesome be able to see all of these singularities, strung like a long line of fairy lights shining back across your life.  Thanks, Dorian, for teaching me and reminding me.

Get a complimentary laser coaching call with Halle and solve the one big thing that’s keeping you from moving forward: HalleEavelyn.com/breakthrough